Whilst holiday in North Wales I was delighted to escape out for a couple of runs along the gorgeous coastline that borders the Hafan Y Mor Havan Caravan Holiday Park. If the pull of spending time with my family hadn’t been so strong I would have strapped on a backpack and disappeared for a whole day! The bays that weave along the coastline, with the undulating land rolling into the sea, are a living, breathing gallery of art.

The pathways, cut into the dense, fern covered terrain, lead over land that has witnessed centuries of human history.

As I looked toward the magnificent hills of the Snowdonia National Park my eyes kept being drawn to Criccieth Castle, built around 1230. It’s not really visible in this photograph (the zoom on my phone camera wasn’t sufficient) but to my eyes it was a dominant feature on the landscape. A historic marker of the people that have inhabited this land.

Running along the trails and along the foreshore, whilst the tide was out, felt so invigorating to my legs. The terrain mixed with the scenery filled my legs with energy to keep on going. My mind travelled from being blissfully in the moment, with the natural surroundings, to stepping back in time to a land that never knew caravans!

And then, as I turned inland, I stumbled across a country scene so reminiscent of New Zealand, my home for some seventeen years, and where we are heading back to live as a family in October of this year.

But it was the sea that drew me back. Seeing the magnificent blue of the water, surrounded by green hills, under a beautiful blue, summer sky.

And when my run was done I turned to bid the clouds (the non-threatening kind!), dancing their shadows over the distant hills, farewell; grateful for their presence after a year of living under a Californian blue sky.

My body and mind shan’t forget the feeling of running on the North Welsh coastline. I left footprints, I took photographs and Wales left my heart marked with love for its natural beauty so steeped in history. 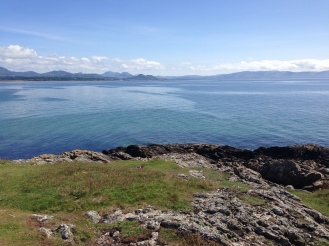